Your cart is empty.
You are here    Flowers by the Sea / Salvias A to Z / Salvia karwinskii 'Ted's 18 footer'
Details
Product Colors
Cultural Icons
Related Products
Send to friend
Ratings & Reviews
From Everything Salvias

Salvia karwinskii 'Ted's 18 Footer' reaches heights almost double those of our other tallest varieties of this tough shrub. It's long bloom season includes winter, during which it can withstand short periods of freezing weather as low as 20 degrees F and still keep blooming.

Due to its generous size, Ted's 18 Footer should be planted where protected against winds. A south-facing wall is ideal for winter warmth. Although this sage will thrive with average watering based on local conditions, it loves moisture. As to soil, it isn't picky but needs good drainage.

Ted's 18 Footer is deer resistant and is an excellent choice as a dramatic accent, screen or background plant.

To encourage upright, compact growth, periodically remove some of the flowering branches. Or you can prune the plant down to a few active growth nodes once a year at the end of its winter flowering season when it appears there will be no more frost.

The parent species of Giant Karwinski's Sage comes from moist mountain areas in Mexico and Central America. In the wild, it's found in oak or pine forests at altitudes of 4,000 to 8,000 feet. Both the scientific and common names honor German botanist Baron Wilhelm Friedrich Karwinsky von Karvin (1780-1855) who explored Mexico in the early 19th century.

Salvias and their companion plants pop with color. Sweep your eyes from top to the bottom here for an impression of this plant's color combinations. The first row displays blossoms from primary to less dominant shades and includes any contrasting throat color. The second tier is the main hue of leaf-like bracts or calyxes supporting the flowers. Foliage (one or two colors) leafs out in the bottom row.
Primary color - Deep Pink
RHS# 52B

This plant thrives on or at least tolerates lots of water, especially when soil is well drained.

A number of Salvias hold up well in areas where rainfall is a regular occurrence. Some even tolerate boggy conditions. These are usually top-notch plants for regions of the country, such as the Southeast, where summers are soggy.

This plant flowers throughout Winter.

Many winter-blooming Salvias begin flowering in late Fall and continue on into Spring; there is a lot of overlap in blooming seasons for Salvias. Winter bloomers include evergreen as well as deciduous perennial Salvias.

Depending on type, they grow well in USDA Zones ranging from 8 to 11 with some tolerating the chill of Zone 7. 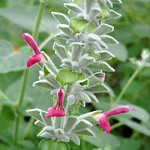 (White Headed Sage) One of the most visually stunning members of the genus, this large growing, tender, winter blooming species from the mountains of Ecuador will turn every head with its furry white calyxes and brilliant magenta red flowers.

(Wooly Multicolor Sage) In Greek, "lasiantha" means "wooly flower." The flowers of Salvia lasiantha are surrounded by wooly bracts, but are even more notable for transforming from apricot-orange in the morning to reddish-purple later in the day. 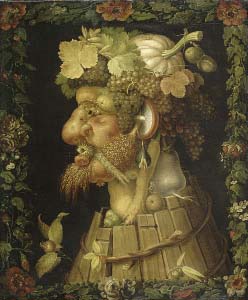 Fall is the best time to plant many Salvias. Read on to find out why . . .

This picture, "Autumn", was painted by Giuseppe Arcimboldo in 1573.

Read the Article
The Roseleaf Sage Group: Who's Who & What's What 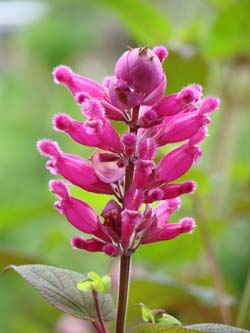 Differentiating between the plants in a closely related group can feel similar to being an outsider attending a large family reunion. Identifying who's who and how they are connected is a challenge. That's the way it is with Mexico's Roseleaf Sage (Salvia involucrata) Group, which is well loved by hummingbirds. One thing that may be confusing about the various cultivars and hybrids in the group is their abundance of puffy, tubular, magenta flowers. FBTS Online Plant Nursery grows a number of species from the group. Read more to learn about the randy Roseleaf Sage Group that hybridizes freely and includes many species that bloom in in winter.

Got my order this afternoon. Everything was great, much better than I expected. Thanks for the extra keikis. Many of your keikis were bigger and more advanced than some 2 1/2-3 inch potted orchids I've received from other mail-order nurseries at 3 times the price.
Jay Press
I recently received my very first order from Flowers by the Sea Nursery in Northern California. It won't be my last. I had researched a lot online about Salivas and although many of the more exciting varieties seemed suitable for my climate -- I knew no nursery that grew them -- meaning I...
Dan Tyson
Plants arrived in good condition Dug hole and planted salvias. Weeks later had new flowers on them Seem to be thriving. Will be anxious to see how they look next year Will definitely order more plants.
Timothy blosser
I love the salvia's that I received! They were beautiful, healthy and in-bloom. I will buy more in the future.
Daphne
I ordered 6 plants in early July. They were shipped very quickly by FBTS. I was stunned when the box arrived completely beat up. I was worried about my new plants. I opened up the box, and it took sometime to unwrap the plants, due to the extra packing efforts of FBTS. I was amazed that...
Megan
BEAUTIFUL! love plants, beautifully packed and Kermit was most helpful! thanks...
ann fischer
Very happy with purchase.
NELLY
I always await my Flowers by the Sea order like a child awaiting Christmas! Even though I know the plants I ordered and I know every plant will be perfect, it is exciting just to open the box and experience the love and care that goes into every shipment. Then to await the show in my garden!...
Nancy L Newfield
What a wonderful find! Thank you Flowers By The Sea for the amazing salvia plants. I am so excited that I found your site! The plants arrived in beautiful condition. I will definitely order more salvias in the future!
lk
Incredible beauty and stunning selection!!!! All the specimens we bought of the hundreds of rare and wonderful varieties available at FBTS were healthy and thriving after their inception and rearing in the huge, state-of-the-art greenhouses, in which many hummingbirds overwinter, and gorgeous...
Mary Bull & Robert Krebsbach
Submit a Testimonial
Read More