Bring on the humidity, because this beautiful Salvia farinacea hybrid can handle it. Also known as Mealy Cup Sage, Salvia farinacea is primarily native to the American South. The other parent plant of Magic Wand Sage, which was developed in Israel, is an unknown wild species.

In 2016, the University of Georgia awarded Magic Wand “plant of distinction” status, which requires good flowering and consistent new growth throughout the growing season.

Average watering based on local rainfall is sufficient to keep this heat-tolerant sage looking its best. Give it well-drained soil and full sun to partial shade.  Expect lots of buzz from bees, butterflies, and hummingbirds.

(Kudos Yellow Hybrid Anise Hyssop) Flowers by the Sea is one of the first nurseries nationwide to grow Agastache x 'Kudos Yellow'. This is one of the best deep yellow Agastaches we've found, due to its large, dense flower spikes and bushy, upright form.

(Heart Leaf Sage) From the rich plains of Northern Argentina comes this delicate looking sage with heart-shaped leaves and pale blue flowers so perfect they seem to be molded in wax. Although a slow grower that requires good garden culture, this Salvia is exquisite. 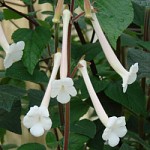 We highly recommend the much improved Salvia guaranitica 'Purple Haze' as an alternative to this older variety.