Getting Started: Salvias for the Southwest 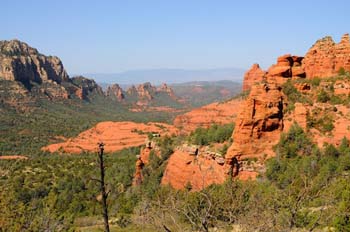 Ask anyone to describe the American Southwest, and they're likely to sum it up in three letters : "D-R-Y."

Yet precipitation can vary a lot here state by state and even within different parts of the individual states. For example, in Phoenix, Arizona, where snowfall usually measures zero inches, the historic average annual rainfall is 7 inches versus the national figure of 37 inches. Further north in Grand Canyon Village, the historic average for rainfall is about 16 percent and snowfall is 61 inches, which far exceeds the national snow average of 25 inches.

When nearly 3 inches of rain fell in Phoenix on September 8, 2014, the hydrophobic desert soil couldn't soak up the water quickly enough to avoid flash floods. However, in areas with regular rainfall and absorbent soils, three inches doesn't cause much concern.

One thing that is consistent about the story of water throughout the Southwest, is that rain and snow can rapidly swing from famine to feast to misfortune. Consequently, plants that are particularly successful in the Southwest are ones that can survive long dry spells as well as heavy downpours. They also must withstand intense summer heat, high altitude sun and soil that is often low in fertility.

Many drought-resistant Salvias appreciate a good soaking and fit the plan for waterwise Southwestern gardens. However, before discussing some of the many sages from Flowers by the Sea that are made for these conditions, we need to consider regional boundaries and how drought varies within the Southwest's individual states.

Drawing Lines in the Dust
As with identification of any region in the U.S., some differences of opinion and necessity govern what are considered to be the Southwest's boundaries. Sometimes the southernmost part of California is included in the definition as well as far western Texas.

But the Southwest is primarily thought of as Arizona, New Mexico, southern Colorado, southern Utah and the southernmost tip of Nevada. That's a big enough chunk of the continent to chew on for the moment.

Another set of boundaries to consider is in the interactive USDA Plant Hardiness Zone Map. It can help you select Salvias and companion plants appropriate for your part of the Southwest based on the region's average minimum winter temperatures stretching from Zone 4b (-30 degrees F) to Zone 9b (25 degrees F).

Although a perennial or shrub with roots that handle frigid Zone 4 temperatures can also survive Zone 9 winters, the reverse isn't true. For a complete explanation of the role zones play in plant selection, please read Getting Started: USDA Plant Hardiness Zones.

CLIMAS, a Southwest climate study network out of the University of Arizona, in 2002 published a paper, The Climate of the Southwest, saying that the Southwest is characterized by subtropical traits (such as summer monsoon) due to a "quasi-permanent subtropical high-pressure ridge over the region." Super-heated, moisture-laden rising air from the tropics creates this high-pressure zone, which allows heat but little moisture to fall into the region during winter and spring. This partly explains the area's warm, blue-sky days during winter.

Defining and Comparing Southwestern Drought
The National Drought Mitigation Center in Lincoln, Nebraska, tracks changes in precipitation throughout the nation and produces maps for individual states weekly at its U.S. Drought Monitor website.

To understand variations in Southwestern moisture from one state to another and from one year to the next, it's helpful to explore and compare National Drought Monitor maps. We limited our investigation to the last week of May for a number of years in each state.

The last week of May 2015 was unusually damp and cool throughout Colorado, eliminating drought -- at least for the meanwhile -- in many areas and decreasing it dramatically in the southern part of the state. The result was a map that was mostly white to indicate absence of drought, because precipitation levels met or surpassed the state's historical average at that time. But the state's end-of-May map from two years earlier showed a patchwork of orange, red, rust, tan, and yellow that represented drought statewide. It displayed a large chunk of southern Colorado in extreme drought (red) to the worst level (rust), which is titled exceptional drought.

The eastern half of New Mexico also benefited from abundant moisture in May 2015. In contrast, the May 27, 2014, New Mexico map showed almost the entire state in severe to exceptional drought.

Large areas of brown, red and orange (the middle ground of "severe" drought) dominate the May 26, 2015, Nevada map. But if you compare it to the last week of May 2011, the map at that time was completely white. This was also true for neighboring California. Winter snows in the Sierra Nevada Mountains govern both states' drought profiles. Similarly, the moister southern tip of Nevada is moderated by conditions in Arizona.

Although significantly wetter than in 2014, the May 26, 2015, Arizona map is covered with colors showing that precipitation wasn't up to snuff. As a whole, by 2015, Arizona hadn't met historical averages for the last week of May since 2010.

In southern Arizona, one of the state's moistest locations in May 2015 was represented by a spot of yellow (lowest level of drought). It's an area representing a unique floristic region of what are known as the sky islands.

The area is also a central gateway to America and Canada for about 18 species of hummingbirds. The birds migrate north through the Rocky Mountain flyway in spring and summer, then return home to Mexico and points south for winter.

Southeast Arizona is where we begin our discussion of sages just right for the Southwest by going back in time to one of the most unusual honeymoons in American history.

Discovering Lemmon's Sage While Honeymooning
Sky islands occur on mountain ridges around the world. They are similar to ocean archipelagos in which the native species of neighboring islands may vary significantly. Sometimes a plant may be endemic to a single mountain ridge.

Southeast Arizona's sky islands top steep, closely spaced mountain chains separated by valleys and canyons of grass and semi-arid desert often referred to as "seas" isolating the flora of one chain from another. They include the Catalina, Chiricahua, Huachuca and Santa Rita mountains, which are about 30 to 40 miles south of Tucson.

Self-taught botanists Sara Allen (Plummer) Lemmon (1836-1923) and John Gill Lemmon (1832-1908) could only guess at the surprises they would discover when they decided to conduct a combined plant expedition and honeymoon in untamed Southeastern Arizona from 1881 to 1882. Sara's trousseau included boots fitted with leather leggings intended to stave off prickly pear needles and snakes.

Writing about the Lemmons in the first issue (1979, p. 12) of the University of Arizona journal Desert Plants, Frank S. Crosswhite noted that one of their sky island discoveries was the fragrant, extremely drought-resistant plant that would become known as Lemmon's Sage (Salvia lemmonii).

Flower color can vary in Lemmon's Sage from pink to red. Bloom tends to be abundant and occurs off and on from spring through fall.

Selecting Drought-Resistant Sages for the Southwest
One of the easiest ways to find sages that are likely candidates for your Southwestern garden is to visit our list of Drought Tolerant Salvias. It will lead you to sages that are exceptionally capable of thriving in dry conditions.

For example, California native Salvias are among the most drought-tolerant plants. These include varieties of:

It's also a good idea to explore the long queue of plants in the "Average" water range where you'll find many sages that not only do well in dry gardens but also flourish with supplemental watering. However, don't overdo it, because overwatering decreases bloom and causes foliage to become lax.

Efficient groundcovers for shade that require some watering include the Southwestern native Arizona Blue Sage (S. arizonica) and its variant Arizona Deep Blue (S. arizonica 'Deep Blue') -- both for Zones 6 to 11 -- as well as the Texas native Cedar Sage (S. roemeriana) for Zones 7 to 9.

Becoming Acquainted with the Autumn-Mountain Sage Group
Perhaps the largest and most varied group in the average watering range encompasses the Autumn and Mountain Sages as well as their hybrids. To see the whole list, click on Special Salvia Groups in the products menu then select Autumn Sage (S. greggii) and Mountain Sage (S. microphylla).

Whereas Mountain Sage is native to Arizona and is found throughout Mexico, Autumn Sage comes from Texas and northern Mexico. Similar to Lemmon's Sage, Autumn Sage has a dramatic history, involving another self-taught plant explorer Josiah Gregg. He discovered S. greggii during lulls in the Mexican American War while working as a scout for the U.S. Army.

Both Autumn and Mountain sages hybridize readily within each species and between S. greggii and S. microphylla. Mountain Sages primarily have red to pink flowers. Autumn Sages come in a broader color range, including whites and purples. Pastels occur when they cross hybridize. Another significant difference between the two species is that Autumn Sages have tiny, smooth foliage while Mountain Sages have larger veined leaves.

Finding Solutions Far from the Southwest
If you live in the Southwest, you may think it best to look to North American (including Mexican) native species for drought tolerance. However, there are also low-water solutions to be found in faraway lands with similar geography and climate.

These intriguing foreigners include high-altitude sages from the Eurasian steppe lands, such as Turkish Salvias. They are beginning to take off in Southwest gardens due to being a good match for conditions, including drought, gritty soils low in fertility and temperature extremes ranging from frigid winters to broiling summers.

You might also think that FBTS is far afield, because we farm on California's Mendocino Coast. But we know lots about Salvias and grow hundreds of varieties. If you have any questions about low-water gardening or the plants in our online catalog, please send us an email or call. Living with California's lengthy dry spells for so long, you might say we have a PhD in drought.