(Genii Fuchsia) Chartreuse foliage so bright that it almost appears golden surrounds the dramatic tubular flowers of Fuchsia 'Genii'. The flower's skirt-like sepals, which are often described as "cerise" - sort of a cherry red - flip up over dark violet petals from which long, graceful, cerise anther and stigma filaments dangle.

This mid-sized shrub is attractive whether massed as a long flowering hedge or grown as a single, dramatic container plant. It's also useful as a summer annual in areas where cold winters don't allow its survival as a perennial. Hummingbirds enjoy its rich nectar.

Genii is often called a Hardy Fuchsia, due to being related to the most cold-tolerant of Fuchsias - South American Fuchsia magellanica, a native of the continent's far southern edge along the Straits of Magellan. So, Genii is ideal for cool, moist settings, such as along the Pacific Northwest coast. It needs plentiful shade, whether deep or partial, because it's damaged by too much direct sun. Genii also requires rich, well-drained soil and an application of fertilizer every two to three weeks.

Victor Reiter, Jr. (1903-1986), a founder of the California Horticultural Society, hybridized Fuchsia 'Genii' in 1951. The Fuchsia genus is mainly native to Mexico, Central America, and South America, and was first introduced to horticulture around 1700. Fuchsia hybridization was popular in Europe by the early 1800s, and the hybrids traveled to San Francisco in the mid-1850s. Today, it's estimated there are 110 species and thousands of varieties of Fuchsias worldwide.

One way that Fuchsias are categorized is by number of petals. Genii is a single, which means its flowers have 4 petals. Doubles have 8 or more petals whereas semi-doubles have 5,6, or 7.

Fuchsia 'Genii' is so beloved in the UK that the Royal Horticultural Society gave it an Award of Garden Merit (AGM) in 1993.  AGMs are based on characteristics such as resilience, ease of care, resistance to pests, and stability of appearance. In short, Genii Fuchsia is reliable and pretty. We highly recommend it as well.

This plant thrives when planted where it will receive morning sun followed by afternoon shade, such as on the eastern side of a house. Make sure it isn’t exposed to midday and afternoon sun, which can damage tender leaves during the summer when sunlight is more intense due to being more direct.

Although midday is when sunlight is most direct, it takes time for the atmosphere to heat up and for heat to peak at sometime in the afternoon. Salvias that prefer cooler temperatures are protected by afternoon shade during the hottest time of year. 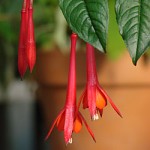 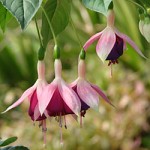 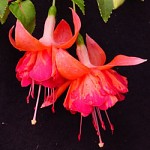 (Fuchsia Giant Bicentennial) Fireworks and fountains of nectar for hummingbirds! That’s what you get with Fuchsia ‘Bicentennial’, which is ideal for hanging baskets. The flowers are large bursts of marbled red and orange petals, creamy pink tubes, and sepals combining magenta and orange.