(Queen Elizabeth Fuchsia) Long and slender, the upward curling red sepals of Fuchsia 'Queen Elizabeth' rise above a corolla of cerise petals. This bountiful bloomer is a trailing Fuchsia with mid-green foliage. It's ideal for hanging baskets.

Queen Elizabeth Fuchsia's branches reach a height of only about a foot before curving downward. They are procumbent, which means that when this Fuchsia is planted in ground, its branches fall and creep along the soil without setting roots.

In addition to trailing species, the Fuchsia genus includes shrubs and climbers of varying heights. Another way in which they are classified is by the number of petals in their corollas. Fuchsia Queen Elizabeth is a single that has only 4 petals. Doubles have 8 or more petals whereas semi-doubles have 5, 6, or 7.

All Fuchsias require moist but not soggy soil that is fertilized every two to three weeks. Some grow well in full sun, but all are agreeable to some degree of shade. Queen Elizabeth Fuchsia needs partial shade throughout the day, such as on a patio where shade trees provide dappled sunlight.

Gordon Garson of Montebello, California - a former agricultural city just east of downtown Los Angeles - hybridized Fuchsia Queen Elizabeth. He introduced it in 1942, six years before the American Fuchsia Society Registry began. It was also ten years before Queen Elizabeth II succeeded to the throne. So, this Fuchsia honors the first Queen Elizabeth (1533-1603). Garson, who was born in Scotland just before the turn of the twentieth century, is also known for hybrid fuchsias he named for his wife Janet, daughter Mima, and Sir Winston Churchill.

The Fuchsia genus has homelands worldwide yet is primarily located in Mexico, Central America, and South America where the climate is moist and temperatures are moderate. It found a new home along the West Coast and other coastal areas (such as in Ireland and the UK) in the 1800s.

(Willie Tamerus Fuchsia) Pale salmon sepals flare out like elegant tutus over the rosy red-orange corollas of long-tubed Fuchsia ‘Willie Tamerus’. The blossoms drip so gracefully from the lax foliage  that  this petite hybrid is an ideal hanging basket plant. 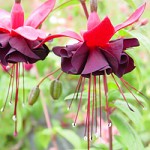 (Roesse Blacky Fuchsia) The crimson sepals of Fuchsia ‘Roesse Blacky’ contrast dramatically with ruffled corollas of a purple so dark it is almost black. This shade-loving, trailing Fuchsia is ideal for containers including hanging baskets. 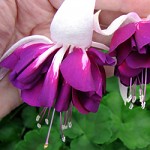 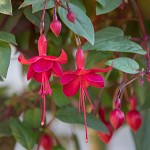 (Marinka Fuchsia) Red, red, red — that’s Fuchsia ‘Marinka’ from the tubes and sepals of its blossoms to its corollas. This historic hybrid was introduced to horticulture sometime between 1890 and 1902. 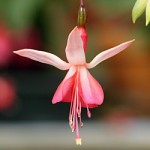 (China Lantern Fuchsia) White, pale pink, and red combine in the elegant flowers of Fuchsia ‘China Lantern’. Hummingbirds love this is long blooming, trailing choice that is ideal for hanging baskets and containers. 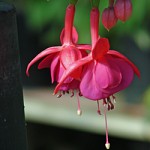 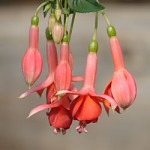 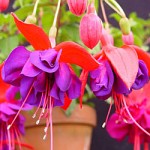