(Ava Hybrid Anise Hyssop) Raspberry calyxes support Ava's rosy-pink flowers, which whorl on tall spikes similar to many Salvias. When the blossoms are spent, the calyxes remain colorful. This long-blooming hummingbird magnet is tolerant of cold, heat and drought. 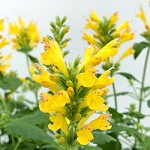 Rated:
1 to 5 of 5
Everything Salvias articles for Agastache
Ask Mr. Sage: Where Can You Grow Agastache?
Question?