Your cart is empty.
You are here    Flowers by the Sea / / Composing a Symphony of Pastel Salvias Including Elk Rainbow Sages...

Composing a Symphony of Pastel Salvias Including Elk Rainbow Sages 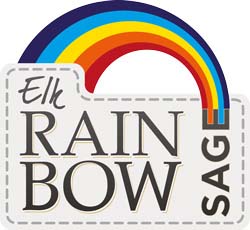 If you want to orchestrate a peaceful symphony in a flowerbed, planting a profusion of pastels is one way to do it. Pastels are lighter hues of bright primary and secondary colors. Blues become powdery; reds tone down to demure pinks and salmons; purples fade to lavender; oranges turn peachy; and yellows and whites turn creamy.

Although gardeners often visualize bright colors when thinking of Salvias, there are a number of pastels in the genus. These include:

While touring our catalog, you'll notice that many of our plants are not available all year long. This makes it possible to stretch resources and offer a wider range of plants. Here is more information about our Spring Limited Availability Program.

Lavender flowers dominate and range from nearly white -- such as those of White Sage (Salvia apiana), which owes its common name to its pale foliage -- to the deeper shades of the Cleveland Sages (Salvia clevelandii spp.) and the Purple Sages (Salvia leucophylla spp.).

Our group of California natives also includes the bicolor Salvia relative Island Pitcher Sage (Lepechinia fragrans), which demonstrates how delicate looking cream and lavender flowers can be deceiving. Although this plant is less adaptable to extreme heat than the other California natives, it is similarly tough in its ability to get by with little water during summer.

Turkish Beauties
Central Asian sages -- such as ones from Turkey -- sometimes look fanciful. These include the large, celestial pink-to-violet flowers of Blue Turkish Sage (Salvia cyanescens), which are shaped like parrot beaks. The foliage of Blue Turkish Sage has such a coat of fuzzy, moisture-conserving hairs that it sometimes appears white.

Far Eastern Woodland Pastels
One of the ultimate pastel beauties in our gardens is Bicolor Szechuan Sage, a species without a proper botanical name. It is a mid-sized woodland perennial from China that has fuzzy, dusky lavender and pale lemon-yellow bicolored flowers. How unceremonious to be forced to call it Salvia sp. from Szechuan! Unfortunately, botanical naming is an expensive project.

A lovely choice from Nepal that deserves a place in your pastel garden is Himalayan Cloud Sage (Salvia nubicola), which has light yellow flowers shaped like parrot beaks and marked with thin, purple stripes. Similarly pale, the rosy cream flowers of Japanese Kyushu Woodland Sage (Salvia nipponica 'BSWJ5829') look as if silk worms might weave them. So don't be put off by it's odd numerical cultivar name.

Certainly there are Jame Sages in bright, bold colors, but many are ethereal, almost luminous pastels, such as Elk Lemon Light Jame Sage (Salvia x 'Elk Lemon Light'). We developed the Elk Rainbow Sage Series, which contains brights as well as pastels and bicolors, at our coastal farm near the village of Elk in Northern California. This tells you what adaptable hybrids Jame Sages are with their ability to thrive in a relatively cool coastal climate as well as semi-arid Southwestern lands.

Among our Elk Rainbow Sages, you'll find a wide range of blues, reds, yellows (including creams), oranges, purples and bicolor varieties. Sometimes the bicolors look like glowing botanical interpretations of sunrise and sunset.

Elk Rainbow Sages are the kind of plants that lure viewers into close observation. So they work well in containers, along pathways and at front of border. They are drought tolerant yet appreciate regular watering based on your local conditions. Bloom time extends from spring into fall with lightest flowering usually during the hottest part of summer despite the heat tolerance of these sages.

Questions?
From brights to pastels, we love all the many colors of Salvias in our gardens. Whatever kind of flowerbed you are hoping to compose, we'd be glad to offer some tips. Always feel free to contact us with your questions and comments.

Joey
I'm in love with your plants and look forward to their arrival every year! They are always beautiful and healthy! Few people offer the selection that you have and I'm thankful for your website!
Jasmine
the nelson cuphea looked very, very healthy with generous leafage and a strong root system
dooner
I am a first time customer and had reviewed this site's selection several times before buying. I hesitated because I thought the plants were a little pricy and shipping costs were higher than I was expecting. I found the money was well spent. The plants arrived quickly and were absolutely...
Kristine A Smith
I received my order at the time I was told I would get them. They were good after 7 days in shipping, a little dry but they have be growing just fine. I can't wait to see them bloom.
Carol
We ordered plants from Flowers by the Sea and are very happy. Except for one, they arrived in good condition. The service and attention to detail was excellent and we highly recommend. Waiting now for the rainy season to kick it into high gear. I think that will really push them forward.
Susan Miller
My \"Summer Jewell Red\" and \"David Verity\" Salvia arrived on time nice and moist (from CA to GA) and were in the containers on my deck within an hour. Hummingbirds on the Jewell Red Salvia within hours. Vigorous beautiful specimens and prompt arrival assured me that this is the \"only way...
Stephen Wilks