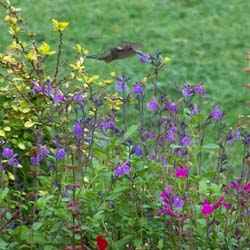 Growing Salvias as perennials can be perilous in USDA Cold Hardiness Zones where winters often are frigid for long periods or where repeated freeze-and-thaw cycles occur. That describes the climate in which long-time Flowers by the Sea customer Michael Kampf has been gardening since he was 6 years old.

Kampf's neighborhood in the Chicago metro area has a Zone 5 hardiness rating. In an interview with Flowers by the Sea, he said that plants in his outdoor gardens must tolerate winter temperatures as low as -20 degrees F and humid summers in which the mercury regularly rises over 90 degrees F.

Warming Up a 'Game of Thrones' Climate

"The growing season here is about three months long, sometimes four if we are lucky," Kampf said.

Kampf added that the growing season doesn't begin for him until nighttime temperatures rise above 50 degrees F. Then he can move "my insane amount of tropical plants outside." These include varieties of Anise-Scented Sage (Salvia guaranitica spp.) and Mexican Sage (S. Mexicana spp.).

The season is further shortened if cold weather persists into late spring. "This year," Kampf said, "our last snowfall was May 16, so it has been a late start." He likens his local conditions to those of cable television's Game of Thrones series in which the phrase "Winter is coming" is a constant threat.

So to ward off winter-gardening blues and be prepared for planting after final frost, Kampf added a "plastic bubble" greenhouse to his home almost as soon as he bought it. Made of double-poly plastic, it measures 12 by 24 feet. Anise-Scented Sage and Mexican Sage were among its first residents.

"They are my favorites of all the Salvias," Kampf said, "with their bright blue flowers and towering heights, which seem to dwarf all the surrounding plants."

Kampf also loves the blue blossoms of Romanian Sage (S. transylvanica), which he leaves in the ground year round and finds particularly successful at withstanding Chicago's shifts from intense cold to intense heat.

Winter Gardening in the Greenhouse

Kampf maintains many of his Salvias over winter in his greenhouse. As the cold weather deepens, he said, the hot pink blossoms of winter-blooming Wagner's Sage (S. wagneriana) remind him of the growing season to come. 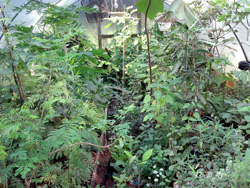 But sometimes greenhouse life can be difficult.

"I am not without casualties as the staff at Flowers by the Sea can tell you," Kampf said. "With the volatile weather here, Salvias are hard to grow, even in a plastic bubble. One day it is 90 degrees outside and you water your plants, and the next five days it is 70 degrees, and you realize they won't dry out, and you just overwatered them."

However, Kampf added, FBTS blue tags -- markers placed in pots of species that suffer from overwatering -- have made his gardening life easier.

"I group all the ones with water restrictions in the same area, which helps immensely," Kampf said.

Try, try again is another rule that Kampf lives by. Each year, he marks the beginning of spring by the arrival of a large box of Salvias from FBTS containing "some new varieties and some replacements of dear friends who did not survive winter."

Going Blue in the Garden

Kampf is a hair stylist by profession but emphasizes that his "obsession" is plants. He has such a natural sense of aesthetics that the colors and textures of his garden combinations are striking even when randomly put together due to the necessity of planting quickly. 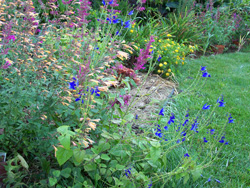 Growing Up in the Garden

Kampf was 28 when he purchased his home. He had already been growing Salvias for 16 years and gardening for 22. He credits his late mother, Kathy Kampf, who died in 2009, with nurturing his interest in plants.

Kathy couldn't help much with the digging and planting of his gardens, Kampf said, but she "drove me everywhere for plants" during childhood. Kampf's mom also brought him cool drinks and stayed to chat.

"We had some of our best talks like that," Kampf said.

Kathy's son repaid her every Mother's Day by planting hanging baskets, a practice that he continued into adulthood. Kampf said he still has the last one he planted for her hanging in his greenhouse.

By age 12, tropical plants had captured Kampf's interest. He experimented with planting palm trees and adding annuals around them. That's when he "fell in love" with his first kind of Salvia -- Scarlet Sage (S. splendens spp.).

Kampf couldn't find many kinds of Salvias in Chicago when he was a child, so he researched them in books and began ordering from print garden catalogs. But what really made his Salvia gardens bloom, he said, was the advent of the Internet, an event that led his plant hunting to "a whole new level" of color and variety.

Discovering Flowers by the Sea

We thank Michael Kampf for discovering us on the Internet and for sharing his gardening experiences and photos in our Portraits in Gardening series, which focuses on customers who are passionate about the Salvia genus.

In addition to providing quality plants and education about Salvias, one of our goals is to continue expanding choices for Salvia gardeners.

For more information about Portraits in Gardening, please write or call us. We'd love to hear about your garden and see your pictures.