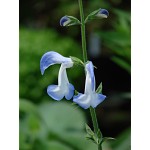 (Guanajuato Giant Gentian Sage) At 3 inches long, the flowers of this Gentian Sage are the largest of any we grow. Guanjuato Giant is also unique for its tall, upright growth and heavily textured foliage.

(Giant Gentian Sage) "Wow!" is what most people say when they see this large Gentian Sage from Central Mexico. Growing to 4 feet tall, it has long, graceful spikes of 3-inch deep, royal blue flowers that are highly visible and easily accessible to hummingbirds.

(Autumn Purple Sage) Small but numerous, the flowers of this sage are a variable shade of light purple that is unlike any other we grow. Native to Southern Mexico and Guatemala, this shrub regularly grows up to 5 feet tall (or taller) and 4 feet wide.

(Lavender Lace Autumn Purple Sage) Large, rich lavender-purple flowers cover this shrubby Sage from late fall into the spring.  It has great vigor, grows fast and is a favorite of the hummingbirds.  A "must have" for warm climate Salvia gardens.

(Orange Mountain Sage) This is the reddest of the Salvia regla species and the most floriferous. Side by side with the other varieties, this one is a bit taller and has darker flowers.

(Orange Mountain Sage) Coahuila, Mexico, is home to many fine Salvias, including the smallest variety of Salvia regla that we grow. This one averages about 3 feet tall and wide.

(Cedar Sage) Scarlet flowers abound on this small, mounding, woodland sage that is native to Texas, Arizona and Northern Mexico. Grow it as a small scale groundcover or mix it with other shade-loving sages in a perennial border or along a path. 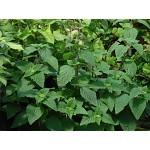 (Scordy Sage) Little is known about this shrubby Ecuadorian native. We're not even sure it is from Ecuador! However, this is another sage that sells itself instantly when seen in bloom. The large clusters of rich, deep violet flowers bloom summer to fall, attracting honeybees and hummingbirds.

(Pine Mountain Sage) Small but numerous, violet and deep purple flowers surrounded by pink bracts are sprinkled throughout this well-branched,shrubby sage like confections. This is one of the showiest Salvias we grow.

(Sinaloan Blue Sage) It's difficult to say which trait is more attractive about this sage -- the airy spikes of deep, true blue flowers or the fascinating spear-shaped foliage that varies from deep green to purple, forming a tidy mat. 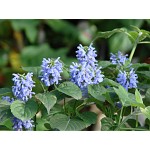 (Smith College Mystery Sage) This mysterious species came to us via Smith College in Northampton, Massachusetts.  We refer to it as "Mystery Sage" as the origins of this fine plant are unclear.

Salvia stolonifera
(Creeping Mexican Sage) Thick, heavily textured and nearly round, the foliage of this gently creeping perennial is as showy as its tall spikes of large orange flowers. This is a water-loving species from Oaxaca, Mexico.
Rated:

(Supreme Sage) Neon pink flowers abound from spring through summer on this small, mounding, rock loving sage that is native to partially shaded limestone cliffs in parts of Texas and New Mexico. Grow it as a speciman plant in the rock garden, or with along with other native Southwestern species with similar cultural requirements.

Impressed with the prompt and friendly service. Plants received in good healthy condition. Am enjoying the growing process and looking forward to the beautiful blooms.
Jo Litterini
I have ordered several salvias and they have all arrived in excellent condition and are doing well in my garden. I love the variety available and the shopping experience online makes it easy to find the plants and colors I seek.
Jasmine
Excellent all the way around, from the variety of plants to the service to the size of the plants that arrive.
Dean Sliger
I am always hesitant to order plants by mail, having had some disappointing experiences, but my first order from Flowers by the Sea was perfect in every way. We marveled at the incredible care shown in the way the plants were packed for shipping. All 14 plants in our order (mostly salvias)...
Ananda Patterson
I just received 7 salvia plants: salvia coccinea summer jewel pink and lavender, salvia cinnabarina, salvia fulgens, and salvia guaranitica black and blue. They arrived in perfect condition so perfectly wrapped and protected in a nice size box. I unwrapped them and my plants ranged in height from...
Sheralyn
Plants were very well packed, and arrived healthy. I planted them last month and they are blooming and looking beautiful!
Kate
I received an invitation to comment on the salvia arizonica that I planted this fall. Normally, I decline opportunities to review products or services. FBTS is different. The salvia arizonica , salvia ultraviolet, salvia pozo blue, Furman's salvia greggii, salvia marine blue, and salvia...
Charles V Hughes
I just received another order of BeautifulSalvias from Flowers By The Sea. The plants are large and healthy in perfect condition. I really can not say enough positive things about Kermit and Vikki!You will not find better salvias or better service anywhere.I have ordered a number of thimes since...
Rose Hodges
Three out of the four salvia plants I ordered were outstanding. The fourth was one I would have never selected at a nursery as it was very mediocre in shape as the top had been lopped off and it wasn't full. I hope it will grow out of it's current sad condition and become a nice plant. Hated to...
Carolyn Rice
I'm in love with your plants and look forward to their arrival every year! They are always beautiful and healthy! Few people offer the selection that you have and I'm thankful for your website!
Jasmine
Submit a Testimonial
Read More