Salvia dorisiana
(Fruit Scented Sage) This plant has it all -- big, light-green leaves that are fuzzy soft and large magenta-pink flowers that smell intoxicating and bloom from winter into spring. Fruit Scented Sage is one of the strongest and most deliciously scented plants we have encountered.

(Shaggy Chiapas Sage) This is a sweetheart! Glowing magenta flowers lure the eye as well as hummingbirds to this heat-tolerant sage. It begins blooming in late summer where weather is warm and in fall where it is cooler. 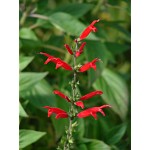 Salvia elegans 'Golden Delicious'
(Golden Pineapple Sage) The bright crimson flowers of this extremely fragrant sage are attractive to both humans and pollinators. However, it is the glowing golden foliage that most distinguishes this cultivar from other varieties of Pineapple Sage.
Rated: 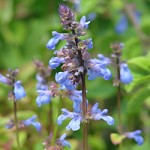 (Ground Ivy Sage) Native to Central Mexico's highlands, this creeping perennial grows at a altitudes of more than 10,000 feet and can handle some chill. Its common name comes from its scalloped yellow-green leaves, which resemble Ground Ivy or Glechoma.

Salvia greggii 'Cherry Chief'
(Cherry Chief Autumn Sage) With hundreds of varieties of Autumn Sage on the market, there is much confusion as to which ones to plant.Â  This red-flowered cultivar, developed by Richard Dufresne of North Carolina, is a top choice.
Rated:

Salvia greggii 'Lowrey's Peach'
(Lowrey's Peach Autumn Sage) No other Salvia has a color like this: a warm, rosy orange with a pastel peach skirt and bright yellow throat. Wow! This is our best pastel orange Autumn Sage not only due to its blossoms but also it's compact branching habit and glossy foliage.
Rated:

(Big Orange Autumn Sage) Standout color is the big draw for this large growing Autumn Sage. Collected in the mountains of Northern Mexico, it grows well in a wide range of climates, including the hot dry Southwest and the cool moist Pacific Northwest. A difficult color to capture in a photo, it is well described as a warm orange with a scarlet overlay. 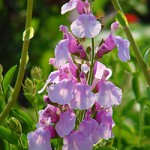 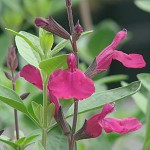 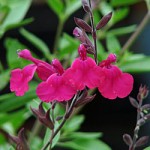 (Raspberry Autumn Sage) Dark calyxes and stems contrast intensely with the bright berry-colored flowers of Salvia greggii ‘Raspberry’. It's one of our fastest growing, earliest blooming Autumn Sages and has fragrant foliage.

(Salmon Autumn Sage) Creamy salmon-colored flowers with white throats make this elegant Autumn Sage perfect for a pastel garden or as a cooling color in a mixed sage border. Bloom time is spring into fall for this petite Salvia greggii native to the American Southwest and Mexico.

(Stormy Pink Autumn Sage) The dramatic name of this floriferous Autumn Sage is due to the calyxes cupping its smoky apricot-pink blossoms. Some gardeners report gray calyxes and others say dark plum. But for whatever reason, the Stormy Pink that we grow on our Northern California coastal farm has green calyxes with dark stripes.